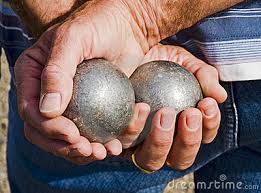 Petanque is played with boules which are rolled on a hard packed court. The boules are  chrome balls slightly larger than an American hard ball baseball.

I am club president of the Boule Cadienne de Lafayette Chapter of the Federation Petanque  USA. We began to play in an organized club in 2007. We have a club page and a Facebook page.

If you want to join the club, please complete the steps listed on this page.

Petanque is a played with chrome balls about the size of a baseball and rolled on the ground on formal courts in Girard Park. All skill levels are invited to participate in the tournament, including first time players. All equipment is provided to play.