Folio 7 uses colors to indicate the width of a line as shown in Table 1.0 below.

=2= How to select an existing Pen Style?

The screen shot below is AutoCad Release 2017 of the print command and then selecting new from the drop down menu for plot style (pen assignments).

-2- Use the drop down box in the upper right hand corner.

-3- Select Folio7 at the mid point in the list.

-4- If there is no Folio7 pen style, then one can be created as explained below. 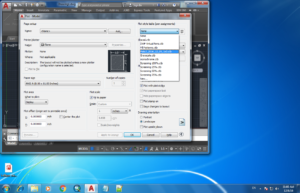 =3= How to create a pen assignment table?

The screen shot the configuration file in table view is shown below after the pen weights are entered for colors 1 (Red) to 8 (Black).  The color name (red) appears on the screen in the drawing as red; but plots/prints to the color black with a line weight of 0.7000 mm. The only variables to change are color and line weight.

-3- Change all the colors to black.

-4- Change the line weights as listed in the table above or as shown in the screen shot below. 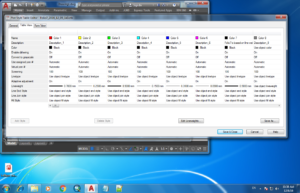 The first illustration (4.1) shows the pen weights as showin in Autocad before the drawing is plotted/printed. 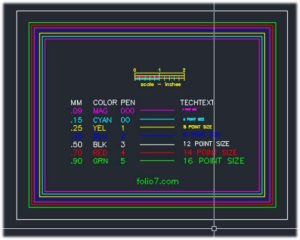 The second illustration (4.2) shows how the pen weights are displayed on sheet of paper when plotted. 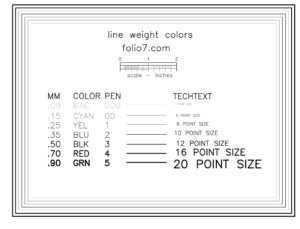 =5= What about vintage pen sizes?

These pen weights configuration screens are little changed from Version 12 in the early 1990’s to the present when this article is being written.

The vintage drafting pen weights can be illustrated in the photo below from Wikipedia’s article on Technical Pens. Although the colors do not correspond to Folio7 colors, the width of line being draw in AutoCAD can be approximated and understood by studying the pen nibs, that is the tips of the rapiograph pens as manufactured by Rotring in Germany

The pen names listed in Table 1 are not longer made in the USA and are not used in the commercial description of pen to be purchased from Europe. However, the names of the pens (No. 1 Pen, No. 2 Pen, No. 3 Pen ….) are still used but are still used by American draftsman to discuss their work. 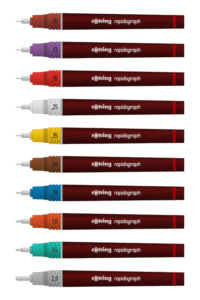